Diabetes is a disease in which blood levels of glucose (blood sugar) greatly increases due to insufficient production of insulin. Insulin, a hormone released by the pancreas, controls the amount of glucose in the blood.

Food and drinks consumed are split into components (such as glucose), which body needs to function properly. The sugars are absorbed into the bloodstream and stimulates the production of insulin by the pancreas. Insulin helps sugar from blood to enter into the cells. When it gets into cells, sugar is converted into energy, this energy is used immediately or stored until the body needs new resources. At humans, blood glucose concentration varies throughout the day. Increases after eating and returns to the optimum level in the next 2-3 hours. When blood sugar is normal, insulin production is decreases. Blood glucose levels typically range within precise limits between 70 and 110 milligrams per deciliter (mg / dL) in blood. When we eat carbohydrates can sugar level can increase more. People over 65 have slightly higher blood sugar, especially after meals.

Type 1 – In Type 1 diabetes (previously called insulin-dependent diabetes or juvenile-onset diabetes), over 90% of pancreatic cells that produce insulin are destroyed permanently. As a result, the pancreatic insulin production is decreased or absent. Only about 10% of cases of diabetes are type I. Most people with diabetes are type I disease before 30 years.

It is considered that an environmental factor – possibly a viral infection or a nutritional factor that acts in childhood or adolescence – induce destruction of pancreatic cells that produce insulin by the body’s immune system. Some people are more susceptible to environmental factors because of a genetic predisposition.

Type 2 diabetes (previously called non-insulin-dependent diabetes or adult-onset diabetes) is characterized by the pancreas continues to produce insulin, sometimes even more than naturally. However, the body develops resistance to the effects of insulin, so in reality there is a shortage of insulin.

The two types of diabetes has very similar symptoms. The first symptoms are caused by the direct effects of hyperglycemia. When blood sugar rises above 160-180 mg / dL, start removing glucose in urine. If urinary glucose excretion increases further, the kidneys will excrete additional water to dilute glucose.

Other symptoms include visual disturbances, drowsiness, nausea and reduced endurance.

Type I – In people with type I diabetes, symptoms often begins suddenly and with increased intensity. It can quickly install a condition called diabetic ketoacidosis. In the absence of insulin, most cells in the body can not use blood sugar. To survive, these cells begin to use a secondary mechanism for energy. Fat cells begin to metabolize fats, leading to the production of compounds called ketones. Ketones are a source of cellular energy, but causes acidification of the blood (ketoacidosis).

Early symptoms of diabetic ketoacidosis include feelings of thirst and disposal of large urination volumes, weight loss, nausea, vomiting, fatigue, and – particularly in children – abdominal pain. Breathing becomes deep and rapid as the body tries to correct the acidosis blood. Breath smells of acetone, ketones smell is caused by breathing excreted. Without treatment, diabetic ketoacidosis can lead to coma and death, sometimes within a few hours.

In the long run, people with diabetes may experience many severe complications. Some of these complications begin during the first months of the onset of diabetes, but most appear only after several years. Most complications are progressive. Better the patients can control their blood sugar better, the risk of developing or worsening of complications is reduced. Increased glucose leads to both small and large diameter blood vessels to narrow. The walls of small blood vessels is accumulate?d saccharide substances and lead to thickening and increase their permeability. Tissue blood supply is progressively reduced, especially in the skin and nerves.

Inadequate glycemic control leads to increased blood lipid concentrations, with atherosclerosis and reduce blood flow through large vessels. Atherosclerosis is 2-6 times more common in people with diabetes than in those without the disease and tends to occur at younger ages. Over time, high blood sugar and circulatory disorders lead to lesions of the heart, brain, limbs, eyes, kidneys, nerves and skin, with angina, heart failure, stroke, cramps when walking (claudication), decreased acuity visual, renal, neurological disorders (neuropathy) and skin damage. Heart disease and stroke are more common in people with diabetes. Circulatory disorders and skin infections lead to ulceration and wounds heal more slowly. People with diabetes have increased risk of ulcers and infections do feet or legs. Often, these injuries heal slowly or not at all, so it becomes necessary to amputate the affected segment. 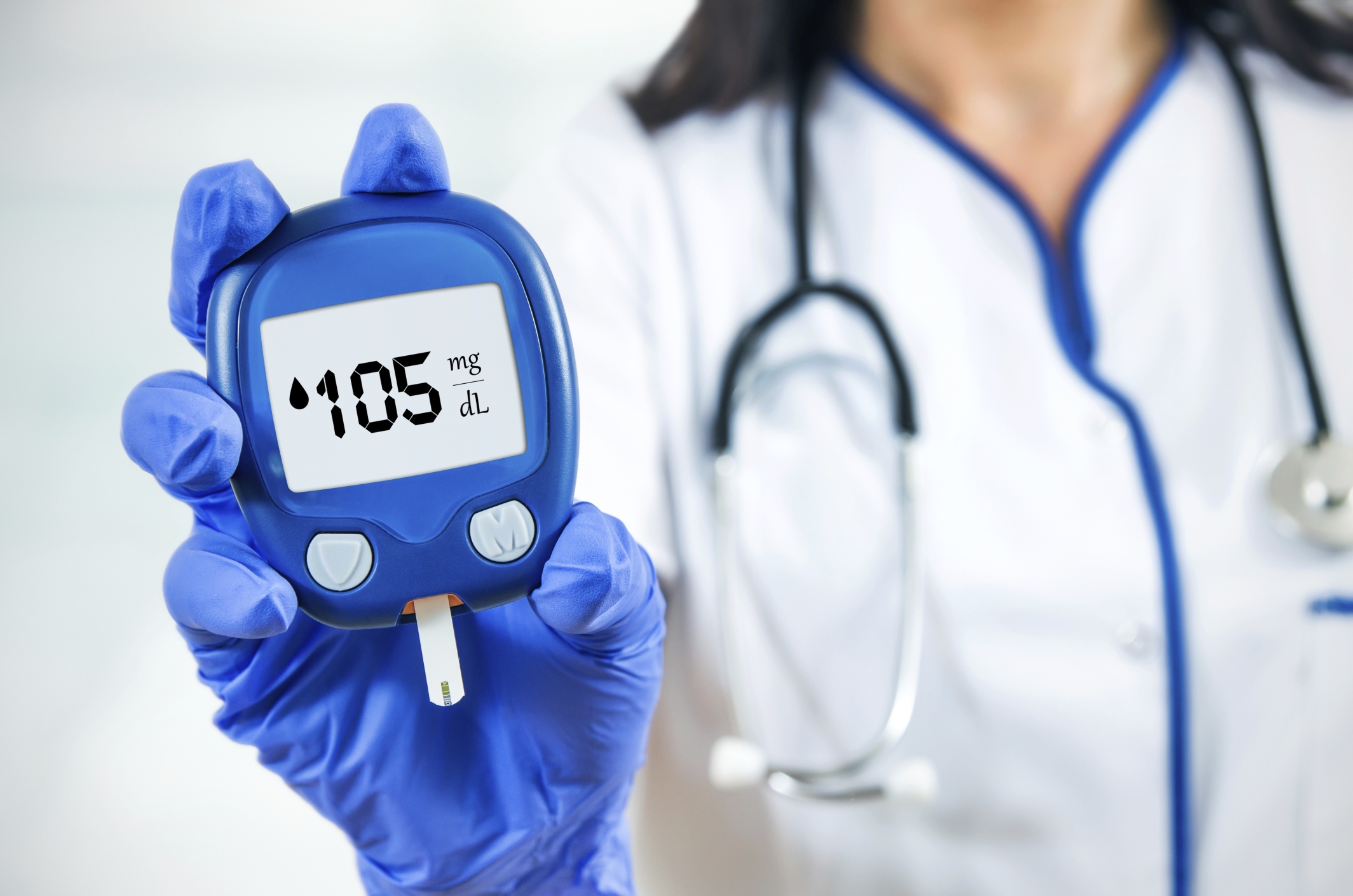 These patients often develop bacterial and fungal infections, usually involving the skin. When blood sugar is high, white blood cells can not combat infections effectively. Any infection that evolution occurs is more severe than normal. Lesions of blood vessels in the eye can lead to blindness (diabetic retinopathy). These vessels can be blocked by laser surgery, thus prevented retinal lesions. As a result, people with diabetes should conduct an annual eye examination to be detected early through eye injuries. Renal function disturbances, sometimes progressing to renal failure requiring dialysis or kidney transplantation. Usually doctors analyzing urine of people with diabetes to detect increasing the amount of protein (albumin), which is an early sign of kidney damage. At the first sign of renal complications, patients usually receive treatment with inhibitors of angiotensin converting enzyme (ACE) inhibitors, drugs that reduce the rate of deterioration of renal function. Nerve damage is manifested in a number of ways. When one is affected nerve weakness occurs suddenly at a lower or upper member. If nerve damage in hands and feet (diabetic polyneuropathy), patients have sensory disturbance, tingling or pain and weakness in the affected segments. Cutaneous nerve damage increases the risk of repeated skin lesions, because individuals can not perceive variations in pressure and temperature.

Treatment of diabetes consists of diet, physical activity, education and – in most cases – drugs. If a person with diabetes manage their blood sugar control, the risk of complications is greatly diminished. The goal of treatment of diabetes is thus maintaining blood glucose to normal levels as much as possible.
Treatment of hypertension and hypercholesterolemia can also prevent complications of the disease. It is effective and daily administration of low-dose aspirin.

People with diabetes greatly benefit if they learn about the disease they have, understanding how diet and exercise affect blood sugar and learned how to avoid complications. Information may be provided by a nurse trained specifically for this purpose. Individuals with diabetes should always wear a medical bracelet to her doctors to draw attention to the presence of this disease. This information allows rapid initiation of treatment savior, especially in case of injury or altered mental status. Adjusting diet is very important, regardless of the type of disease. Physicians recommends a healthy, balanced diet and efforts to maintain a healthy weight. Some people benefit if talking to a nutritionist to devise an optimal diet. People with type I diabetes who fail to maintain a normal body weight, may require only small doses of insulin. In general, people with diabetes should not eat sweet foods in large quantities. It is also good that the meals are taken at regular intervals; long periods between meals should be avoided.

Since there is a tendency to increase blood cholesterol is necessary to limit food intake of saturated fat. Sometimes you have administered drugs that reduce cholesterol levels. Adopt a schedule of physical activity also helps control weight and blood. Maintaining low glycemic is difficult. The major risk is that trying to reduce blood glucose concentration can decrease too sharp blood sugar (hypoglycemia). Hypoglycemia should be treated urgently. Glucose should be administered within a few minutes to prevent permanent damage and relieve symptoms. The sugar is usually administered. Although any suitable carbohydrate, glucose acts faster than table sugar (sucrose containing regular sugar). Many people with diabetes have at their glucose tablets or containers in which glucose are dissolved. Other options are ingestion of a glass of milk (which contains lactose, a type of sugar), sugar water, fruit juice or eating cakes, fruit or other sweet foods. In more severe cases may require intravenous glucose.

Another treatment consists of the administration of glucagon hypoglycemia. Glucagon may be injected intramuscularly and induces the hepatic release of only a few minutes of large amounts of glucose. There are small kits contain a syringe filled with glucagon solution which can be used by those with diabetes in emergency situations. Diabetic ketoacidosis is also a medical emergency, because it can cause coma and death. Hospitalization is required, usually in the intensive care unit. It is administered intravenously large amounts of fluid and electrolyte, such as sodium, potassium, chloride and phosphate, to replace losses caused by excessive urination. In general, insulin is administered intravenously, thus acting as the dose may be adjusted quickly and easily. It is measured in every 2 hours glucose, ketones and electrolytes. In addition, the acidity was measured and blood. Sometimes additional treatments are needed to correct the acidosis increased. But glycemic control and replacing lost electrolytes allow restoration of normal acid-base balance of the body.

Hyperglycemic hyperosmolar coma treatment of non-cetotice is similar to that of diabetic ketoacidosis. Fluid and electrolyte losses must be replaced. Reduced blood glucose to normal gradually to avoid the sudden transfer of fluid from the brain tissue. The blood glucose control is easier compared to cetoacidotica coma and blood acidity does not increase very much.

In Type I diabetes the experimental treatments are promising. Such treatment is to transplant insulin-producing cells. This procedure is not performed routinely but it requires taking immunosuppressive drugs to prevent transplant rejection. There are new techniques by which immunosuppression may not be required.

It is an unfortunate fact that millions of people around the world get into some kind of depression at least once a year, an increasingly common problem for the developing world. How do you know if what you feel might be symptoms of depression? Here are some of them: Lack of energy. Feelings of sadness. […]

What exactly is Travel Insurance policy and simply how much Does That Cost?